KAREN SPRIGGS - 3D MODELING
PROCESS
I had a general idea of how I would design the character when I made the graybox. I knew it would be a girl wearing a casual outfit and if I was able to figure out how to pose her I would have her reading in the red leather chair by the fireplace. Her color palette is similar to that of the scene itself, with warm colors being the main focus. However I now realize that she would look weird sitting in the red chair since so much of her is covered with that same shade of red so she would blend into it. I originally was going to have her without shoes (since people usually don't wear shoes inside), but I had issues making her foot a part of her leg. Having her feet defined by boots was the simpler option so I went with that.

When I modeled the character, I began with the torso and used the extrude tool to create the arm and leg on the right side of her body. Once that was done I deleted the faces on the left side of the body and mirrored the right side so that she could have arms and legs on both sides. I used camera-based UV unwrapping to get her initial UV map, then cut it on edges of her body so that I could unfold it. I had to move around most of the outer edges because they ended up overlapping with some of the edges inside that "cut", so certain parts of my UV map are asymmetrical. This did not seem to significantly affect the way the texture looked on the body so I left it as it was, and made the face area larger so I could make the texture on it more detailed. I tested out the face texture with a few different iterations to see which one fit more, then altered the topology of the face slightly to make her "nose" stick out and to give her cheeks.

If I were to do this assignment again, I would try to make hands and figure out a better way to make her hair. I knew that she would look uncanny if she was bald so I thought that some less detailed hair would be better than nothing, but it looks off from certain angles. If I could make the hair look less "stiff" and better on the top of her head that would make it look much better. Even though I intended for her dress sleeves to be long enough that only her fingertips were showing, it still looked off when she did not have defined hands or fingers. The topology of the arm at the end made it difficult to create hands, so I will have to create the arm so that this does not happen again next time.
PRESENTATION SHEETS 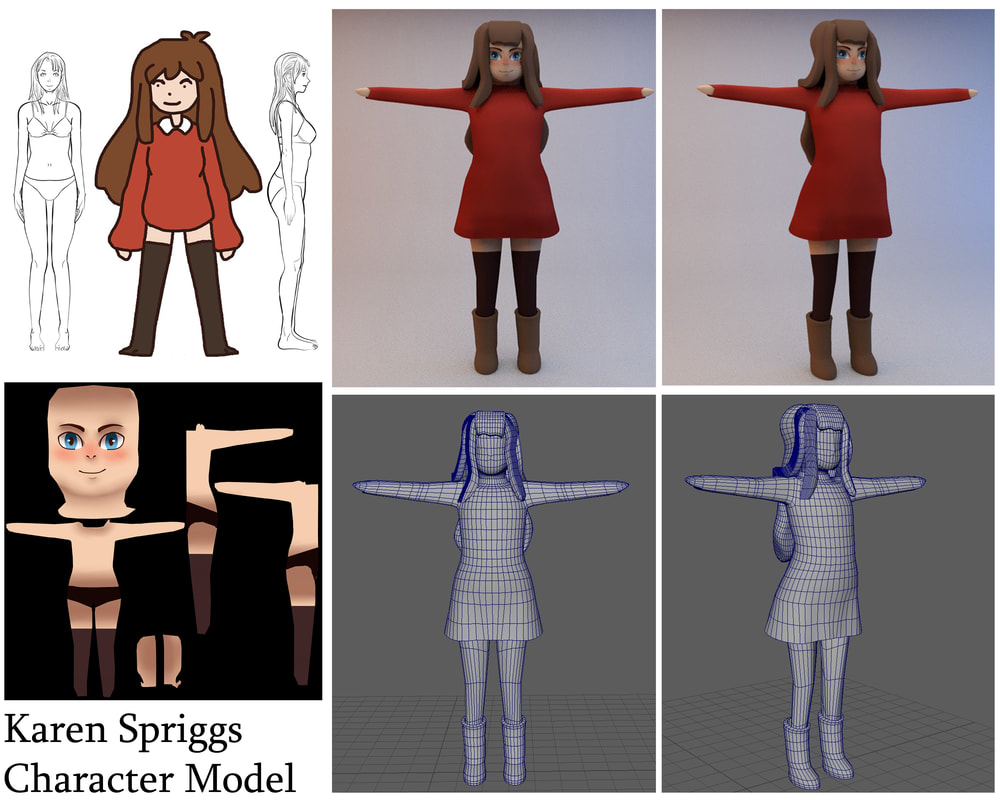