KAREN SPRIGGS - 3D MODELING
PROCESS
I decided to model the armchair first as I believed it to be one of the central props in terms of conveying the scene's story and mood. It would be where I would want to place the character within the scene (with them sitting on the chair and possibly reading a book), and it is widely considered to be a "cozy" piece of furniture. My house also has two leather armchairs in the living room, so I see them every day when I go to my room and thus have a good idea of how big they are and what they look like. I used images of a different type of chair as a reference since I wanted the chair in my scene to be rounder than the ones I have at home. Round objects are associated with comfort and security because of their lack of harsh angles or edges.

In order to construct the chair I mainly used the extrude and bevel tool, with the latter being used to create the round edges on places such as the sides of the chair, its arms, and the cushion. The reference images I set up made the use of the extrude tool very satisfying as I manipulated the geometry to match it. It was generally very satisfying once the model had become to resemble an armchair.

If I were to do this assignment over again, I would have included more subdivisions in my polygonal geometry and used the smooth tool. I was originally concerned that if I used the smooth tool too much, the model would lose its recognizable shape, however I realize now that the tool can still be effective when put on lower settings.
PRESENTATION SHEET 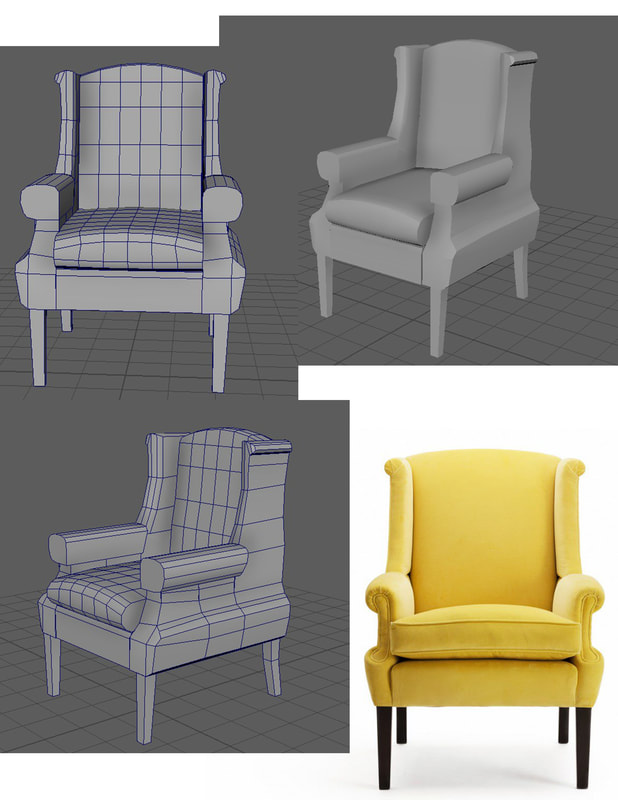